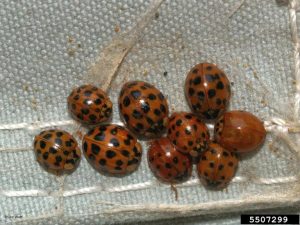 Adult multi-colored Asian ladybird beetles are convex in shape and about 1/4” long. Specimens from higher elevations are larger than those from the Piedmont and Coastal Plains. There are usually ten black spots on each forewing, but some have fewer spots or faded spots and some have no spots at all (see Figure 1).

Multicolored Asian lady beetles are effective predators of aphids and some scale insects and are extremely beneficial for both agricultural and horticultural crops.

As temperatures start to drop in the fall, adult beetles begin to search for suitable overwintering sites. They tend to congregate on the sunnier or warmer sides of buildings, or on exposed, light-colored buildings. Of course, this doesn’t mean that people with dark-colored siding, brick or log homes are immune to the lady beetle assault. On warm winter days, the beetles may become active and move towards light or bright surfaces. They are often found on windows, light fixtures and ceilings. Multi-colored Asian ladybird beetles do not reproduce indoors; in the spring, they will move outdoors in search of prey.

Ladybird beetles are primarily a nuisance. They do not eat wood or furniture. However, the beetles may stain fabric and painted surfaces if squashed. In addition, there have been concerns that large numbers of beetles may possibly cause air quality problems indoors that could trigger allergies and/or asthmatic reactions.

While it is not 100% effective, preventing the beetles from entering structures is one of the best long-term approaches for dealing with ladybird beetles. Install tight-fitting sweeps on exterior doors and weather stripping around door frames. Openings where utility pipes and wires enter the foundation and siding should be sealed. Make sure that window screens are in good condition. Indoor sprays tend to be ineffective against ladybird beetles. Invading beetles should simply be vacuumed up. The vacuum bag should be sealed up and disposed of. Outdoors, a residual spray insecticide may be applied around windows, doors, eaves, soffits, attic vents, etc.

Its first detection in North Carolina was in Forsyth County in 2009, and it has since spread rapidly throughout the piedmont and mountain regions of the state. The coastal plain has had fewer occurrences during this period, although the insect has appeared in isolated locations. As of June 2016, it had been confirmed in 70 of NC’s 100 counties. 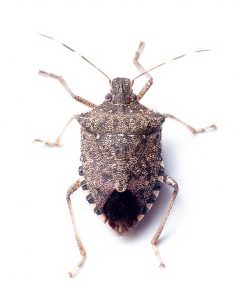 Adult brown marmorated stink bugs are slightly larger than 1/2” and vary in color from brown to gray. Adults have characteristic brown and white bands on the outer edge of the thorax, and white and brown banding on the next to last antennal segment (see Figure 2).

Adult females lay egg masses in midsummer. There are five nymphal stages. New adults emerge in late summer. In the fall, adult brown marmorated stink bugs aggregate on and inside houses, sheds and other structures in search of an overwintering sites. The bugs can give off a characteristic odor if they are crushed or disturbed.

Just as with ladybird beetles, exclusion goes a long way in preventing brown marmorated stink bug invasions. Make sure exterior doors have tight-fitting sweeps, seal openings where utility pipes and wires enter the foundation, and make sure window screens are in good condition.

The use of pesticides indoors for controlling the brown marmorated stink bug is not warranted; invading stink bugs  should be removed with a vacuum cleaner. Outdoors, a residual spray applied around windows, doors, and other potential entry points may provide some relief.

Adult paper wasps are about ¾” to 1” long and reddish brown to dark brown in color with yellow stripes on the abdomen. They are actually beneficial in that they feed on other insects. 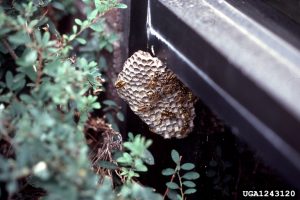 Paper wasps live in nests that usually contain around 250 individuals. Paper-like nests, shaped like tiny umbrellas (see Figure 3) are attached by a short stem to eaves, porch ceilings, attic rafters, decks, and other such protected places.

Paper wasp colonies are annual; workers die off in the fall and only inseminated queens survive. The surviving queens are often seen hovering around chimneys and rooflines as they search for a suitable place to spend the winter. On warm winter days, the queens may become active and may move into living areas of the home through openings such as heating vents, baseboards, and gaps around light fixtures. 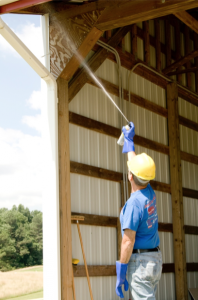 Figure 4. Paper wasp nests should be treated with a Wasp & Hornet spray that can propel the insecticide 10-15 feet (Photo: Patty Alder, NCSU).

Wasps that invade homes can be controlled mechanically, by swatting or vacuuming, or with an aerosol insecticide. Openings through which wasps can enter the structure should be caulked or sealed. In homes, attic vents should be properly vented to exclude overwintering queens. If an established nest is found in the attic, a total-release aerosol may be used on a warm day. Follow the product label instructions concerning how many cans are needed for the size area you are treating. Never exceed this number of units, and always be careful using these products near open flames.

If all the workers have not yet died, and a nest poses a hazard, use a Wasp & Hornet spray that will propel the insecticide about 10-15 feet and direct the spray into the nest opening for 5-10 seconds (see Figure 4). 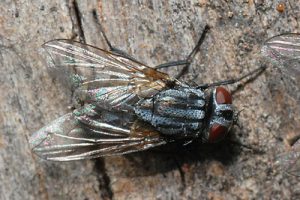 Adult face flies are about 3/8-inch long, slightly larger than the house fly. Females have a gray thorax with 4 dark stripes and the abdomen is mostly black with an orange base, while the male’s abdomen is orange-brown with a black base (see Figure 5)

Female face flies feed primarily on the tears, saliva, mucous, blood, and excrement of pasturing animals, especially cattle. They do not actually bite their victims. Male face flies spend their time perched on vegetation, awaiting mates. Face flies are most likely to invade farm homes or homes located near pastures or where cattle are kept. 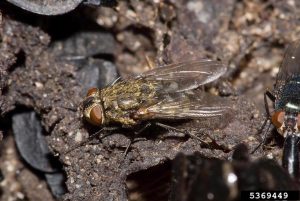 Adult cluster flies are slightly larger than the house fly and dull gray in color with black markings. The thorax is covered with distinct golden-yellow hairs (see Figure 6).

Cluster flies have an interesting life history in that they are parasites of earthworms. Adults lay eggs on the soil and the hatching larvae enter earthworms, develop to their last larval stage, pupate and emerge as adults.

In the fall, adult cluster flies seek protected over-wintering sites within the cracks, crevices and voids of structures. Fortunately, they do not damage structures, but they may leave small dark-colored spots of excrement on windows and walls.

As with other overwintering pests, exclusion is one of the best approaches to preventing cluster fly and face fly invasions. Cracks around windows, doors, siding, utility pipes, behind chimneys, and underneath the fascia and other openings should be sealed. Damaged screens on doors and windows should be repaired or replaced. Light traps may be placed in voids or drop ceilings to help reduce fly numbers.

Indoor crack & crevice & void applications where flies are overwintering may be helpful. However, piles of dead flies left in the walls can sometimes lead to secondary infestations of carpet beetles. When using exterior sprays, it may be more effective to concentrate the chemical on the sunny side of the house, where the flies tend to aggregate.